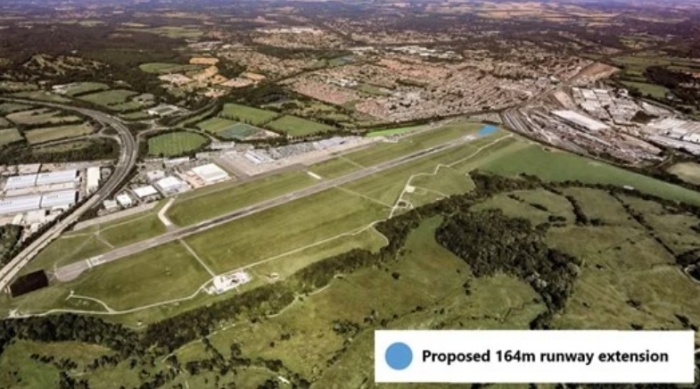 Plans to extend the runway at Southampton Airport have been agreed following a lengthy debate among local councillors.

Airport bosses want to extend the runway by 164 metres.

The move would allow longer-haul flights to use the south-coast airport, and create more than 1,000 jobs.

However, campaigners have described the decision to allow the extension as a “bleak day” and have vowed to fight on.

The decision was made by Eastleigh Borough Council’s full council after the plans were rejected by the local area committee.

Twenty-two councillors voted in favour, with 13 against and one abstention.

Hundreds of people watched the debate, which was held online because of coronavirus restrictions.

Responding to the positive decision from Eastleigh Borough Council to approve the planning application for the extension, Southampton Airport operations director, Steve Szalay, said: “This is the news we have been hoping for and working so hard to achieve.

“By listening to the overwhelming public and business support, as well as the planning officer’s recommendation to approve, the councillors have safeguarded the future of the airport.

“The decision also ensures we are well placed to provide employment and support the region as we seek to recover post pandemic.

“We are excited about our future.”

He added: “This positive decision allows us to further develop our plans, play a full part in the Solent Freeport and deliver on our commitments set out within the planning application, which will further enrich our neighbouring communities.

“Thank you to everyone who has engaged with the consultations and shared their thoughts and opinions.

“We listened and reflected your feedback within our plans.

“You have helped shape the future of Southampton Airport.”