The United States has suffered the deadliest week of the coronavirus pandemic, with deaths exceeding 3,000 per day, as an increase in the number of cases and hospitalizations weighs heavily on the country pending the imminent deployment of the vaccine .

The United States Food and Drug Administration is ready to authorize emergency use of the Pfizer / BioNTech vaccine, while the U.S. government said Friday it will purchase an additional 100 million doses of Moderna vaccine candidate, which it is expected to clear shortly after an advisory group meeting next week.

As federal and state governments prepare to rush vaccines as soon as they’re approved, officials warn it will take months to widely distribute the vaccine.

In the meantime, state and local leaders have placed further restrictions on their economies in hopes of preserving hospital resources and stopping a new wave around the Christmas holidays.

Over the past week, 16,327 people across the country have died from the coronavirus, a record for a seven-day period, and an average of around 2,280 deaths per day. The United States reported 3,000 coronavirus deaths on Thursday, just a day after crossing the threshold of the first time.

Since the beginning of the pandemic, 283,555 deaths have been attributed to the coronavirus, according to data from the Covid Tracking Project, more than any other country. Johns Hopkins University, which uses an alternative methodology, has recorded 294,056 dead, a toll that exceeds the number of Americans killed in action during World War II.

“This week marked another tragic step in our fight against Covid-19,” Joe Biden, US President-elect, said on Friday. “Over 3,000 dead in a single day. . . This is serious business.

Robert Redfield, director of the Centers for Disease Control and Prevention, warned at a Council on Foreign Relations event this week that the daily death toll from the virus in the United States could exceed that of the 9/11 attacks or the Japanese assault on Pearl Harbor. “Probably for the next 60 to 90 days”.

Deaths tend to delay coronavirus cases and hospitalizations, meaning the recent increase in deaths is likely a reflection of infection trends leading up to the Thanksgiving holiday in late November.

Anthony Fauci, one of the senior officials of the coronavirus task force, said on Monday he expected the full effect of “the Thanksgiving outbreak to be another week, a week and a half from now ”, and ran the risk that other events of the holiday season might be“ superimposed ”on that.

Unlike the first wave that hit the northeastern states of the United States in the spring and then a solar belt surge in the summer, the latest phase of the pandemic had a large impact on parts of the country.

Twenty-six states reported their highest monthly death rates from the pandemic in November, and trends show little sign of improvement.

State and local leaders reintroduced restrictions on their economies, fearing an increase cases could overwhelm hospital staff and resources, jeopardizing their ability to help save lives.

California, the most populous US state, has been among the most aggressive as it deals with daily cases, hospitalizations and deaths that have surpassed its previous summer highs.

Much of California is under home orders to preserve the reduced capacity of its intensive care units. Authorities on Friday revealed that available intensive care beds statewide were at an all-time high of 1,450, while cases jumped by 35,468, a single-day record. Another 159 deaths have been attributed to the coronavirus, up from a record 220 on Thursday.

Starting Monday, the state of Virginia will be subject to a nighttime curfew, restricting residents to only essential travel between 10 p.m. and 5 a.m. It will last until January 31. State Governor Ralph Northam – who tested positive for Covid-19 in September – also reduced the size of social gatherings and expanded Virginia’s rules on masks.

Dining room in New York will close starting Monday, Governor Andrew Cuomo announced Friday. The state’s most populous city failed to stabilize its hospitalization rate over a five-day period, a recently introduced target, as officials hope to prevent a repeat of the city’s crisis in the spring. 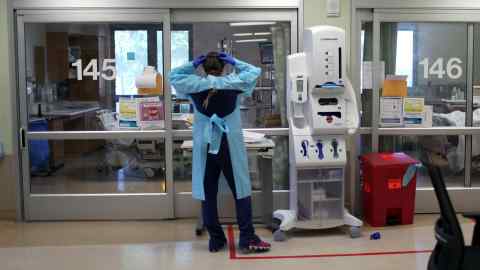 Tom Wolf, the state’s governor, announced on Wednesday that he had tested positive for the coronavirus. Last week, he warned that Pennsylvania would run out of ICU beds by mid-December.

As most of the country grapples with new restrictions and outbreaks, there are some glimmers of hope. In the Midwestern region, where infections soared in September and October, several states are seeing downward trends in daily cases and hospitalizations from peak levels.

Nebraska could ease coronavirus-related measures as early as Saturday after hospitalizations showed a steady decline, Governor Pete Ricketts said on Friday. The state is one day a long way from meeting the criteria that would allow authorities to increase limits on indoor gatherings, allow some elective surgeries, and relax physical distancing rules.