Brazil’s price for its climate goals scorned by environmentalists

Leading environmental groups have rejected Brazil’s pledge to become carbon neutral by 2060 through payment of $ 10 billion a year by other countries, calling the pledge insufficient, immoral and distracting the most pressing problem. : the destruction of the Amazon rainforest.

Ahead of a key climate summit organized this weekend by the UN, UK and France, Ricardo Salles, Brazil’s environment minister, announced the new 2060 target for the Latin American nation to reduce of its carbon emissions.

The target could be accelerated, he added, if developed countries invest $ 10 billion a year in a federal government program to protect the country’s forests, or through carbon trading mechanisms.

“Starting in 2021, Brazil will need at least $ 10 billion per year to address the many challenges it faces, including the conservation of native vegetation in its various biomes,” the letter from the Brazilian government says. at the UN.

“Other decisions regarding Brazil indicative long term [carbon emissions] The strategy, in particular the definition of the final date to be considered for this purpose, will take into account the financial transfers to be received by the country, ”he added.

Mr Salles is a controversial figure who has openly spoken of a desire to open up the Amazon rainforest and other protected lands to commercial activities. “Brazil is once again showing its commitment to climate issues, to the planet,” he said, unveiling the latest proposal.

He has also long been a proponent of the attachment of monetary values ​​to environmental resources. In August, the right-wing minister, close to President Jair Bolsonaro, told the Financial Times the government was developing a program to let private companies pay to preserve pieces of the Amazon by “adopting a park.”

His latest comments on Brazil’s carbon neutrality goals were met with disbelief among environmentalists.

“What is the point of the government in announcing a new commitment by Brazil to neutralize emissions by 2060 if it does nothing to stop the environmental dismantling in the country?” asked Marina Silva, a former environment minister, highlighting the spread of deforestation and the gutting of Brazilian environmental enforcement agencies.

Figures released last week by Brazilian space agency INPE showed deforestation in the Amazon this year peaked at 11,000 km2 in 12 years – much of which is fueled by illegal loggers, cattle ranchers and farmers. wild gold miners in the heart of the forest.

As part of a previous commitment under the 2015 Paris climate agreement, made by the former leftist government Dilma Rousseff, Brazil pledged to eliminate illegal deforestation by 2030, a goal that now seems impossible.

“The Brazilian government’s intention of zero emissions by 2060 is 10 years later than that announced by most countries in the world except China,” said Fabiana Alves, climate coordinator at Greenpeace.

“In addition to insufficient targets, the government is making it clear that it will only think of more ambitious targets if foreigners pay for them, putting the burden of the crisis on the market.”

The move, ahead of the UN summit where countries like China, India and the United States are expected to post pledges to limit climate change, is another example of an attitude that has further isolated Brazil on the international scene, said Marcio Astrini, executive secretary of the Climate Observatory, a coalition of Brazilian civil society groups.

The Minister’s emphasis on attaching price tags to environmental objectives is seen as the government’s main strategy to deal with pressures from international financial institutions.

A group of investors responsible for $ 4 billion in assets this year, called on the Brazilian government to do more to protect the Amazon, with some threatening to divest if nothing is done.

Announcing the “Adopt a Park” program, Mr. Salles said: “The response from the Brazilian government is: we have structured instruments for you, the funds, to come and help us take care of the Amazon. Participate, supervise, act with us. “ 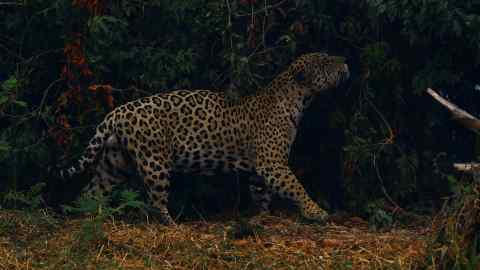 At the time, investors said “positive change” was needed on the ground in terms of tackling illegal deforestation before such projects could be considered.

Despite the funding openings this week, the Brazilian government has reacted strongly to a proposal by US President-elect Joe Biden to create a multibillion-dollar fund to protect the Amazon. Mr Biden has threatened financial sanctions if Brazil does not comply.