Simon Kuper: my two decades as a pioneer of working from home

This week, 26 years ago, I started office life. Dressed in a cheap suit and awkwardly knotted tie, I walked through the security gate at One Southwark Bridge, London, the FT office from 1989 to 2019 – and a sick building if I ever got one. saw one.

Around 5 p.m. on that first day, the full horror of the office worker ‘s existence struck me. The school had done its job of preparing me for daily regimented boredom. But at least school usually ended by mid-afternoon. In the office, long after dark in January, my new colleagues continued to denigrate their computers in a room where the windows did not even open. Careers spent sitting under fluorescent lights had distorted their bodies and skin. One day I realized that I would be them. I’m not a fan of Wordsworth, but I remembered John Mortimer’s lines fictitious lawyer Rumpole always quoted:

I escaped from the office early and have been working from home for 22 years. I only hope that the pandemic will definitely free others from these inhuman places.

Flip through this number and you’ll see some of the things office workers leave behind every morning. The family clings to the edges of Portraits of Endia Beal are remnants of what Orwell satirically called “own life”: the suspect private sphere. Jessica Bernard’s absurd team-building game images represent the lost world of gaming. Hiroshi Okamoto captures the monkey costumes that drain the individuality of office workers.

In Alex Prager renderings of the “end of year celebrations”, the gothic characters with grinning smiles seem straight out of a horror film. Saskia Groneberg’s Sad Office Potted Plants are weak signals from distant nature.

All offices are versions of each other, whether they produce invoices, architectural drawings or newspaper articles. I recognize most of the horrors of these images and I remember others. Decent food – rare in the mid-1990s in London anyway – didn’t exist at Southwark Bridge. The canteen specializes in British-East German fusion cuisine.

Some people spent lunch at their desks eating plastic bags, which on closer inspection turned out to be sandwiches. In a small act of rebellion, a few like-minded souls and I would go to a local cafe that was known as the “Toilet Harpers” because it occupied a converted old public toilet. 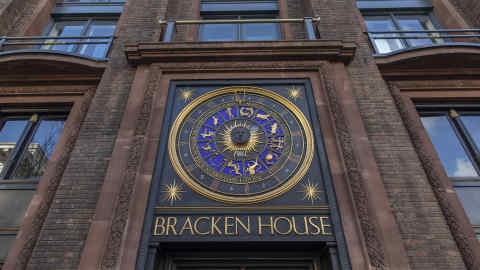 My colleagues were generally good company. Say what you want of reporters, but because the nature of their job is to get information from other people, they tend to be sociable types and good listeners. The profession also has a good gender balance, except at the top.

But I realized that my older colleagues had been institutionalized by office life, sometimes over the course of 40 years. They no longer even expected to see natural light on work days half the year, except on their morning walk from home to the subway. Like lifers, they could no longer quite cope with the outside world. Some only saw their children briefly at night, if that was the case. They had lost touch with old friends because, even on weekends, commuting and work left them too exhausted to leave their neighborhood.

Instead, they had shifted their emotional existence to the office. As in any workplace, people who had worked together for decades took care of each other. A coworker told me that she went to the workaholic editor to confide in a personal disaster that had forced her to take time off. “You won’t tell anyone, will you?” she asked him. He said, “If you only knew half the things people say to me in this room.”

The FT editorials at this time were more Thatcherite, but the workplace was tender. An exhausted case who could no longer write was given the job of transferring messages between offices. When a team of expensive consultants did a time study of our work processes and recommended firing it, the staff rebelled.

The flip side was excessive socialization. People thought they had to be there until 7pm anyway, so in those pre-online days (Southwark Bridge didn’t have internet until about 1998), they might as well spend the time chatting .

The challenge was to relax without the bosses noticing. I found one trick that worked best for white men: leaving a suit jacket draped all the time over my empty chair, so that whenever a boss passed by, usually another white man of similar training, he would think : “Ah, Kuper, good guy, working hourly.

During this time, I feared that I would never escape. Most of my colleagues seem to have given up hope. My friends from the other offices, who are not quite 30 yet, had already started to flatter their pensions. I told a colleague who covered pensions of my ambition to retire at 30. “Not a chance, mate,” he said. One day I saw a man in his sixties limping across town with his briefcase and I thought, in horror, it could be me.

In the summer of 1998, I went to tell the editor of the FT that I was resigning. He did his best to hide his joy. I said I was going to become independent, writing a column for The Observer newspaper. “It’s a leaking ship,” he frowned. The Observer was founded in 1791, but lifelong office workers tend to be risk free. When I left the building, I felt like I was handing over my establishment junior membership card.

I was afraid I would never escape. Most of my colleagues seem to have given up hope. My friends in other offices, still not quite 30, had started to flatter their pensions

But it turned out that even in 1998 all the technology for working from home was already there: the Internet, the telephone and the tube for occasional visits to offices. I was no longer wasting hours a day moving around or chatting. I made sure I left the FT on good terms, so I continued to sell him the odd item. I quickly realized that it was not the work that had depressed me; it was the workplace.

Walking into Southwark Bridge months after quitting, I ran into a former colleague on the stairs. She looked at me with semi-gratitude, stopped, looked at me and said, “You look healthier. It’s because on sunny days I worked from a lounge chair in Regent’s Park.

I discovered over time that my three years at Southwark Bridge have paid off. Because I had spent endless hours with people from FT and knew the corporate culture, a quick email was usually enough to find out if they would accept an item. Later, the FT gave me a column. When I realized that I could write it from almost anywhere, I bought an apartment in Paris. I suspect the FT didn’t even notice that I had moved years later. After acquiring a family, this apartment became my place of work. This is where I wrote this article.

Quite accidentally, I had anticipated a sequence that could become commonplace: spending your first few years at the office acculturating yourself, then gradually detaching yourself until you finally live more comfortably and cheaply at 300 km. Then the big city becomes a casual meeting place and playground, instead of a crowded human supply chain for 1980s offices.

My commute is now 12 minutes by bike. I no longer wear a suit. In fact, I spent much of that longest winter sitting at my desk in a woolen hat. When I want to talk to someone, I decide who it is, so I don’t have to listen to Joe from Graphics talking to me about last night’s Chelsea game while my will to live fades. When I have to get dressed or see colleagues, it is like an exciting adventure.

At the start of the pandemic, around 80% of employees said they enjoyed working from home, according to McKinsey research. I hope they can continue to do this forever.